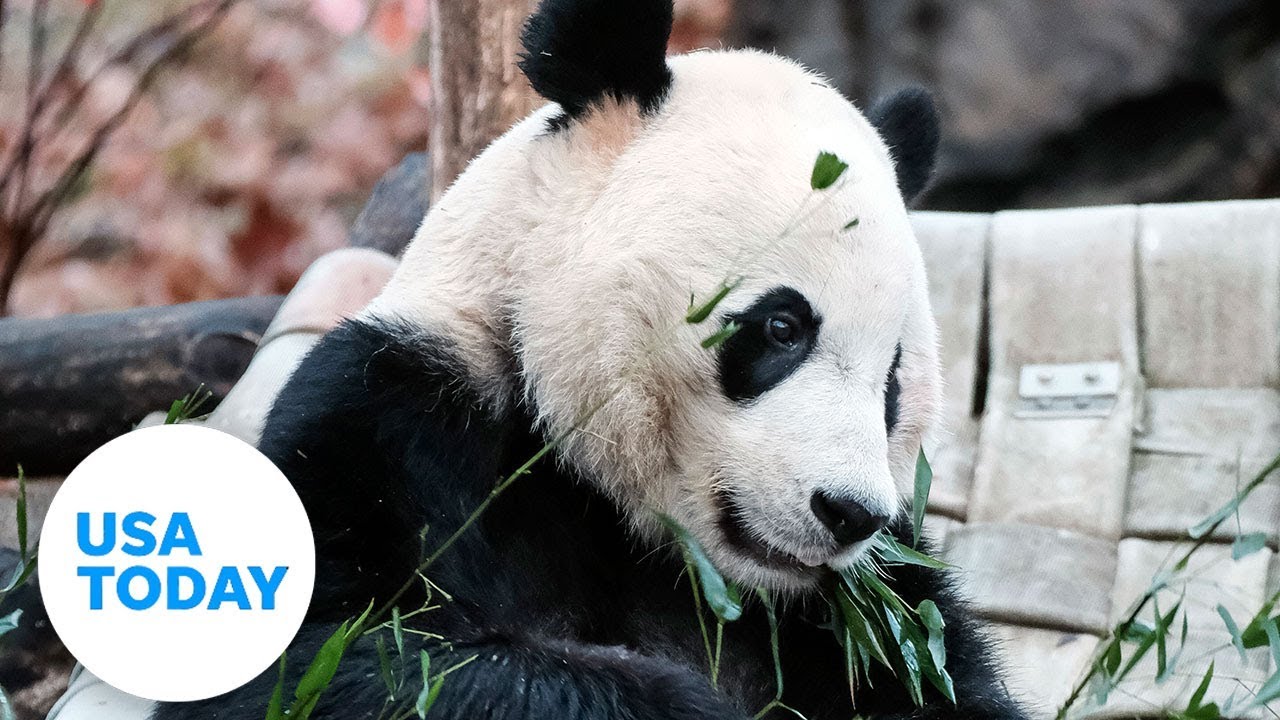 It’s one of his last snacks in the United States before he travels some 15 hours to China.

“He’s very laid back. Look at him,” says Timothy McGrath.

McGrath, 68, is one of the dozens of people gathered at the giant panda exhibit at Smithsonian’s National Zoo before Bei Bei, the cub born here four years ago, leaves for China as part of a research and breeding program.

McGrath has been coming with his wife from upstate New York every few months to visit pandas since they first arrived to the zoo in the 1970s.

Bei Bei is different, though. He’s special, he says.

“I’m devastated,” McGrath says. “I would have been here in a full-body cast to see him off.”

For McGrath, the cub is more than just a zoo animal. He and his wife have seen the panda program and enclosure grow in size and scope, and they’ve formed lifelong friendships with other visitors who come for the pandas. McGrath jokes that when friends show photos of their children and grandchildren, he tells his wife to pull out their panda photos.

“It’s like a magnet,” he says of Bei Bei’s personality.

On Tuesday, the panda is flying to a new home to China, an agreement the zoo and Chinese officials have had since the cub was born, but on his final days in the park, zoo goers and staff have gotten a last chance to see him off.

“It’s all about the fact that we’re sending a bear halfway around the world,” says Brandie Smith, the deputy director of the zoo. “But if you ask me last week, I was looking at baby pictures.”

“He’s our little boy. We’ve been with him every second since he was born. It’s sad,” she says.

How to send a panda to China

Tuesday will be solely about Bei Bei, Smith says. Every detail is rehearsed and planned as Bei Bei travels from the National Zoo in Northwest Washington to Dulles International Airport in Northern Virginia then Chengdu, China. He’ll fly nonstop via FedEx on a Boeing 777 Freighter aircraft, aptly named the FedEx Panda Express.

It’s not the first time zoo officials and FedEx have sent off a young panda. His two siblings have also made the long trek overseas.

Bei Bei, who weighs about 240 pounds, will be loaded into a crate similar to the one his sister Bao Bao used in 2017, which was 55 inches wide by 75 inches long and 50 inches tall.

From there, he and the crew will drive to Dulles and take the 15.5 hour flight to Chengdu.

“I can’t say it’s another day at FedEx because it is special and it takes a special focus,” he said. “We understand the importance of it and what it means to people in the U.S. and China.”

On the flight, Bei Bei will have bamboo, apples, sweet potatoes and other treats, the zoo says. He will also be accompanied by his primary caretaker and a veterinarian for the whole time.

Zoo keepers have recently been acclimating him to his travel crate, as well, so he will be comfortable on the long trip.

Once the flight lands, Bei Bei and the crew will head to Bifengxia Panda Base, operated by the China Conservation and Research Center for the Giant Panda, the zoo says.

There, his keeper will work with Chinese counterparts for a short time to help Bei Bei in his new home and help the zookeepers get to know the animal.

Why Bei Bei is leaving Washington

Giant pandas have been in the nation’s capital since 1972, after former President Richard Nixon visited China that year on a diplomatic trip.

According to the National Zoo, First Lady Patricia Nixon told Chinese Premier Zhou Enlai she liked the animals, to which he responded, “I’ll give you some.”

Ling-Ling and Hsing-Hsing arrived in April and lived at the zoo for 20 years. However, they never produced cubs that survived, and both died in the 1990s.

As part of the agreement with Chinese wildlife officials, all cubs born at the zoo leave at age 4. “We knew from the second (Bei Bei) was born that he is going to go to China when he’s 4 years old. And it’s a good thing,” Smith says.

The pandas take part in a breeding program to boost their population. For decades, the species was considered “endangered” and only recently was recategorized as “vulnerable” by the IUCN Red List of Threatened Species.

Conservation and research efforts by the zoo and its partners in China have helped boost the species numbers, and Bei Bei moving to China to breed once he becomes sexually mature in a couple years will further these efforts, the zoo says.

Panda Express Captain John Hunt said transporting Bei Bei is “beyond any political conflicts or challenges” nations are encountering today. The cooperation between people from both countries shows a common interest in the giant panda species and its conservation, he said.

“Seeing that come together is important, I think, to the globe, and it certainly is for the people involved with it,” Hunt said.

As for Mei Xiang and Tian Tian, the zoo’s agreement to keep the pair lasts only through 2020. Smith says the zoo and Chinese officials will discuss what’s best for the breeding and research program after that.

For more than a week, crowds have gathered around the panda enclosure to see Bei Bei one last time.

“It’s such a rare thing to see a giant panda,” says Karl Rand, 28, of Wyoming, who was visiting the zoo for the first time.

It’s no coincidence people love Bei Bei. “We are biologically programmed to think that giant pandas are cute,” Smith says. With their round features and patches around their eyes, it’s instinct to be drawn to them.

And it’s more than just a cute face. “Pandas are an incredible species,” she says. They’re a bear that has evolved to eat bamboo and can live up to 20 years in the wild and even longer in zoos.

“They bring a lot of people great comfort and joy,” says McGrath, who’s been visiting Bei Bei since the bear’s birth. “They look at you and it’s like they’re looking into your soul.”

Bei Bei is a particularly sociable bear. “He’s very people-centric,” Smith says. He’s also grown an online following around the world as the zoo live streamed his birth and his every day activities. He can often be seen somersaulting about or lounging in his hammocks.

Holly Keller, 38, said she and her son Aiden, 6, have been following Bei Bei for years, both with in person visits and on the live stream. It’s been exciting to watch the cub grow, and they hope they’ll have a way to follow him in China.

Each time they come to the zoo for Bei Bei visits, Aiden is sure to bring his stuffed animal panda, also named Bei Bei. He always shows it to the real-life bear as he stands captivated in front of the enclosure.

Pandas are his favorite animals, and when thinking about Bei Bei’s departure, Aiden puts is simply: “I’m sad because I like pandas.”