That Cyber Monday special from Best Buy sounds really enticing. A 40-inch smart TV from TCL for $159. So what’s the catch?

Which may not be a catch at all, but it is something worth considering. Because if you have Amazon Echo speakers throughout your home, you won’t be able to use them to talk to your new TCL TV.

As all TV sales now tend to be “smart,” they operate on different software platforms, ones you need to consider before making your purchase. 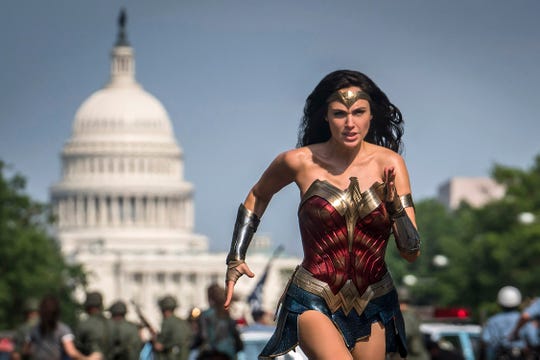 Before you buy a Roku-branded TV, I have three words for you: “Wonder Woman 1984.”

The heavily hyped sequel to the 2017 smash hit “Wonder Woman”  with Gal Gadot, was set to open in theaters, but the pandemic dealt a different set of cards for the film. It’s now primed to debut on Christmas Day in a handful of theaters and HBO Max, the new streaming channel that launched in May.

Beyond HBO Max, Roku, best known for popularizing the streaming player, does offer thousands of streaming channels. Roku-branded TV sets offer the streaming built-in and you get access to “The Roku Channel,” an ad-supported free service which shows  everything from “The Hunger Games” movies to older TV classics like “Bonanza.”

Sets with Roku streaming built in are available from a variety of brands, but most heavily marketed by TCL, Hisense and Element, and they are deeply discounted during the holidays in the $200 range and less. Some of the under $100 Roku-branded models have lower 1080p resolution, while the 50-inch and up are in 4K.

For Roku audio, you can’t connect non-Roku Bluetooth speakers as your audio. Instead Roku will sell you its own wireless speakers for $199.

Voice control on Roku sets are via the Roku remote control and clicking the microphone button.

Amazon-branded TVs are available from Insignia (Best Buy house brand) and Toshiba, and they are aimed at cord cutters and Amazon Echo device owners. Advantage: You won’t have to buy a Fire TV Stick to get streaming as it’s built-in to the set. Amazon offers a menu showcasing live programming (you’ll need at attach an antenna to see the choices) the latest from Amazon Prime Video and the free IMDB channel, and of course, channels devoted to Amazon shopping. Most of the popular new streaming services are offered, either by default or download, such as Disney Channel and HBO Max. But NBC Universal’s Peacock is still missing, months after its July debut.

Amazon promises voice control with these sets, to direct the Alexa personal assistant to turn on and off the TV and select channels for you, but to do that, you’ll need to enable the Alexa skill in your app, or press the voice command on the remote control. Plus, channel selection won’t work with a cable box, just antenna TV.

For TV sound, beyond the soundbar, you can plug in two Echo speakers (or other Bluetooth speakers) and use them as your audio. With a caveat. You’ll need to buy either a FireTV Stick or Amazon’s Fire TV Cube, which allows for hands-free voice control to make this happen.

Fire TV Edition sets tend to be dirt cheap, under $250, while still offering 4K resolution. While hardcore TV critics say the picture quality lacks those of more expensive sets, I say, what are you expecting for $250?

The Google platform is best-known on sets from Sony, TCL and Hisense, and have the “Google Assistant” and “Chromecast” streaming platform built in. In September, Google announced the new “Google TV,” which takes a more Google-centric approach to television by offering personalized suggestions to TV shows you want to watch. The suggestions come from Google following your tastes on Google search and YouTube views. Additionally, Google TV will enable you to run your smart home via Google Nest devices and use your Google Photos collection as a screen saver.

However, Google TV is currently only available via the 2020 $49.99 Chromecast streaming device. Google says this will come to some TVs from Sony and other Android partners in 2021, but only if they’re “eligible.”

Unlike Amazon and Roku, Google tends to be more open about adding most new channels to its lineup, including Disney+, HBO Max and Peacock. Google and Android TV answer to the “Hey Google” command from the Google Assistant.

For audio, you can connect Google Nest audio or other Bluetooth speakers by going to settings and adding the audio.

How to watch together: During this holiday season, have a movie night apart

This is the name for Samsung’s TV operating system, and several newer models answer to many: Google Assistant (for trivia, weather and sports scores), Amazon’s Alexa (for operating the smart home) and Samsung’s own Bixby for running the TV.

Samsung has its own free channel, similar to Amazon’s IMDB and the Roku Channel, called TV Plus. Any resemblance to Pluto TV isn’t accidental. Pluto runs the Samsung channel under the Samsung name and includes channels like CBSN and People TV, Paramount Movie Channel.

Finally, what if you bought that new Roku-branded TV and were determined to see “Wonder Woman 1984” on Christmas Day?

There’s a way, and it’s called a streaming stick.

You can buy an Amazon Fire TV edition, but you really wanted to watch Peacock or HBO Max, which isn’t available on Amazon-branded TVs? Buy an external streaming player. You can pick up a Roku streaming player for as low as $29.99 (and usually discounted) or a Google Chromecast for under $20. With the older generation Chromecasts, you have to find the programming on your phone first and “cast” it to the TV, using a remote control process that talks to the Chromecast.

The 2020 edition of the Chromecast, which sells for $49.99, skips the “cast” process, and offers a menu choice of apps and a remote.

And vice versa, if you had a hankering to watch Peacock (which shows early episodes of “The Tonight Show” for paying subscribers), you could pick up an Amazon Fire TV stick for under $20.

Here’s what Republicans in Virginia and Maryland are saying about election...

This Thanksgiving, the right wine to pair with the meal is...